Returning after adverse weather cancelled last year’s race, we were delighted to again be in Falmouth for the fantastic Run Falmouth Half Marathon. With record attendance, the records kept coming as winner Colin Snook set a new course record of 1.14.28.

Jordan Morant of Hayle Runners was second overall in a time of 1.18.05 and third place went to Ken Walker of Newquay Road Runners whose time was 1.18.51.

The second woman home was Elizabeth Smith of Westbury-on-Trym near Bristol who is a member of the Westbury Harriers. She completed the course in 1.32.47 and said afterwards; “We decided to come down and make a weekend of it, so did some touristy things yesterday.  It was great to come to a smaller race, as many around Bristol are so big.  I didn’t realise quite how many hills there were on this one though, but I’m really pleased with my time today.”  The third woman to cross the finish line was Moira Connor at 1.36.06.

Amongst the competitors was Emily Trevarthen who is taking part in the 2019 London Marathon for Cornwall Hospice Care; “The hardest bit about today was the hills, just trying to get up them, and then when you go down the hills you think oh nice, but then your knees start aching, so you can’t win!  Overall it was better than I thought it was going to be so now I’ve just got to focus on the next six weeks!”

Oli Hoare, Head of Fundraising at Cornwall Hospice Care, said afterwards he was delighted with the 2019 event; “What a triumph with record entries this year and a new course record set. We also had a superb 92 entries for our first Kids Run and that’s not including all their Mums and Dads who joined in too. Thanks to the support of all our competitors we hope to have raised enough to fund a thousand hours of nursing care so that’s another success to celebrate.

I’d like to send heartfelt thanks to all our competitors, Falmouth Road Runners, the Cornwall Road Running Grand Prix Committee and their series sponsor Cornwall Glass, the army of volunteers without whom this event couldn’t happen, Barry Neville and Stephen Hole of Cornwall 4×4, Lifestar Medical, Devon & Cornwall Cycle Marshals, Westcountry Fruit Sales for supplying the post-race bananas and LWC for supplying the wine for all the winners. A big thanks too to all the organisations who donated prizes for the Race Day Raffle, to the team who provided the runners with sports massages after the event and to our lead runner in the Kid’s Run, volunteer Petrina Bradbrook who got all the entrants home safely.”

See the Half Marathon Results 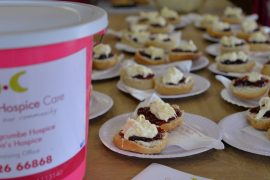