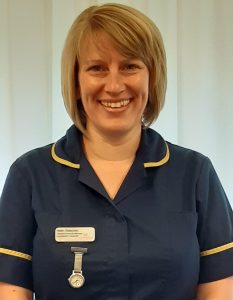 Helen qualified in the early 2000’s from Plymouth University and spent the early part of her career as a Stroke/Head Injury Nurse at Treliske.  Having spent time at the hospice as a student nurse, she knew this is where she wanted her career to develop.

She joined the hospice bank as a staff nurse 2004 and then joined full time in 2006.  Helen then moved over to the Lymphoedema team in 2009 and in 2013 became a Lymphoedema Specialist after completing the Graduate Diploma in Lymphoedema Management.  Helen has trained in Leduc and Fluoroscopy guided manual lymphatic drainage, Lymphatic Kinesio Tape and myofascial release.

In 2018 Helen became the Therapy and Community Services Manager as well as maintaining her Lymphoedema Clinic at Mount Edgcumbe Hospice.

Helen lives in North Cornwall with her husband and 2 daughters and their rescue cat called ‘Marmite’. She enjoys cycling in her spare time.